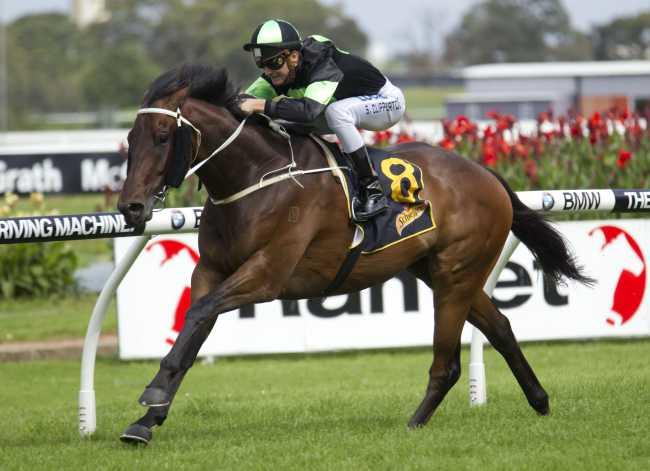 The extremities of racing is something we’re all reconciled to as owners. Nonetheless, it’s never easy dealing with the enforced retirement of a horse as those involved with the handy galloper THORNETT were forced to accept this week when the gelding succumbed to a tendon injury and now has a riding career ahead of him. However as one door shuts, another opens for the owners of GAMBLESTOWN (pictured) who returns from 15 months on the sidelines at Rosehill Saturday.

Joe Pride has been very pleased with the DARCI BRAHMA 7 year old’s progress this time in so touch wood he can regain his best form this campaign. Sunday sees another long awaited return or should we say, debut. The big CHOISIR mare BLONDE BY CHOICE lines up in a 1000m Maiden at the Sunshine Coast after long stints in the paddock as a result of serious leg and pelvic injuries. Given the mare is a 4 year old, trainer Steve O’Dea and her owners have been very patient.

Midweek Queensland racing heads to Doomben where last start winner WAS IT WORTH IT steps out for the O’Dea stable in a 1600m QTIS 3 year old event with Damian Browne to ride. On the same programme veteran REALLY REILLY attempts to redeem himself after luckless runs this preparation thus far.

Newcastle Cup Day on Friday has been condensed this year with a bumper meeting expected and the PROVEN colours will be seen aboard promising 4 year old TAHSIN who contests the 1600m C2. He should appreciate the big stretches of the Broadmeadow circuit and the silken hands of top jockey Blake Shinn.

Finally on the trial front LAST WISH and unraced SO YOU THINK 3 year old DISCREET CHARM head down the hill at Randwick for public hit outs Tuesday. The Thompson stable throws open the doors 48 hours earlier for our OPEN MORNING with John from 9.30am Sunday.