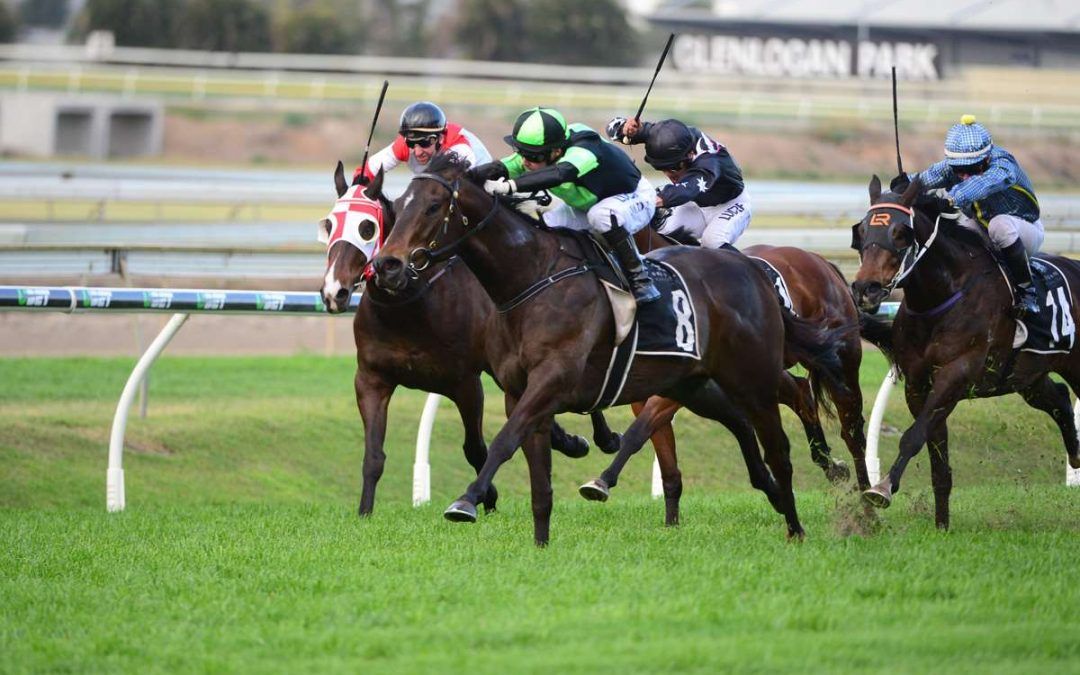 The October long weekend was a memorable one for the owners of GOTTA KISS as the 2yo filly announced herself as a Magic Millions contender with victory on debut at Eagle Farm.

The Steve O’Dea-trained filly impressed with a 2.5 length win for our lucky group of lady owners who are chasing the dream of a $500,000 bonus on Magic Millions day in January.

The result marked our 46th winner for the calendar year, just three shy of our record.

Our only other ladies-only horse to be syndicated this year is a filly by RICH ENUFF from NOTHING COMPARES (more info). She is also currently in work with the O’Dea stable and finished an encouraging second in a jumpout last Friday. Only 10% remains in this girl and Steve anticipates her to be racing before Christmas. CONTACT US to find out how you can get involved in this filly’s career!

BLACKBOOKER: TAHSIN put in an excellent run first-up at Warwick Farm’s Monday public holiday meeting. He showed unusual gate speed that unfortunately trapped him wide throughout but was still running on at the finish. For a seven-year-old having his first start below 1250m in his entire career, he could not have gone better. Trainer Joe Pride will likely find a 1300-1400m race at the end of the month for the gelding.

Comment: Well-bred stayer on debut so likely to find this too sharp but would like to see him doing his best work late.

Comment: Just found a couple better when placing last start over 1000m. Gets out to 1200m for the first time in her short career and that could be key in capturing her maiden win.

Comment: Game in defeat last time and should be better again up to a mile here. Expect him to be on the speed making his own luck.

Comment: She was outstanding first-up over this trip when a fast-finishing second at the Sunshine Coast. Unfortunately she was struck down by a virus soon after and hasn’t raced for some six weeks. Will likely be a little more dour now but her fresh run indicated she is going well.

Comment: Over-raced a touch in blinkers last start and went down by the barest of margins. No reason to say he won’t be figuring in the finish like he has done in all eight of his starts to date.

Comment: Returns from a freshen up after ultimately disappointing in Melbourne. He’s proven to be much more effective running clockwise and is two from two at Randwick.

Comment: Backs up from last Saturday after a close up third over 1200m. The way the race was run on that occasion, the horse had mathematically no chance of winning but his sectionals were outstanding. Looks ready for 1400m now.

Comment: Found herself in the unfamiliar position of leading last start due to an anticipated slow speed and she yielded ground over the final stages to finish fourth. She’s much more effective when ridden cold so hopefully a genuine speed will allow for that here.