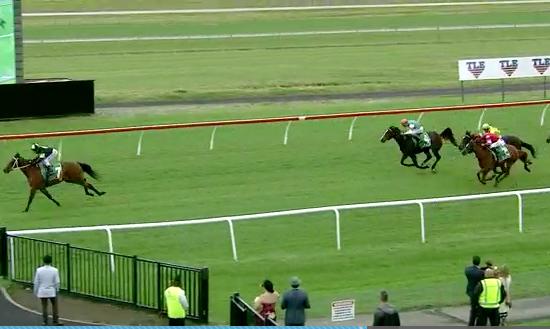 Runners in three states for PROVEN Saturday. Speedy filly BROOK MAGIC (pictured winning at Kembla) has headed south to tackle quality fillies in the GROUP 3 QUEZETTE STAKES at Caulfield. If she can handle the journey south, the reverse way around the sole turn and the step up to STAKES class, she’ll run a bold race for Joe Pride and Damien Oliver.

In Brisbane highly promising filly FRANCISCA goes for three on the trot in the 1350m 3 year old event at Doomben. Very impressive in disposing of maidens at the Gold Coast and then C2 older mares at the Sunshine Coast, the LOPE DE VEGA filly drops back to 1350m around the tighter Doomben circuit on a relatively quick backup with veteran Brad Stewart having his first ride on her. Trainer Steve O’Dea will likely spell FRANCISCA win, lose or draw Saturday.

Down at Kembla a trio of runners carry the black and lime green to complete our three state representation. MASTERATI, a lightly raced 4 year old, steps out over 1200m attempting to break his maiden following a close 2nd at Wyong first up. Then REDWOOD gelding TAMARACK, another Joe Pride galloper,  lines up in a 1400m C1 whilst  John Thompson’s SO YOU THINK 4 year old RATIONALE gets out to 1400m in the maiden for older horses.

Trainer John Bateman heads south to Moruya Sunday with budding stayer BELLA SCENICA who’ll need to figure prominently in the 1650m Maiden if she’s to warrant a future despite having to tangle with an outside alley. Another filly who’s taken time is the CHOISIR mare BLONDE BY CHOICE who’s still unraced after a couple of serious injuries. Steve O’Dea sends her to a Doomben Trial Tuesday, her second this prep and only the third in her troubled career thus far.

Steve also saddles last start winner THORNETT in the 1600m C2 at the Sunshine Coast metropolitan meeting Wednesday and is contemplating running REAL STING, another coming off a victory, at the same meeting. Meantime at Warwick Farm, John Thompson has resuming stayer THEWAYWEARE in the B75 1400m and THE GRANDSON also returning, in a 1200m B70 with Blake Shinn to ride. The consistent Joe Pride trained ARGENT D’OR will either start in the same race as THEWAYWEARE or, extend to 1600m in the B70.

A big week rounds out when Joe trials SO SPIRITED and GAMBLESTOWN again at Warwick Farm Friday and yet another last start victor UNYIELDING steps out in a B60 of 1080m on his favoured ACTON surface at Canberra. Nick Olive has the 4 time winner primed for another sharp performance.