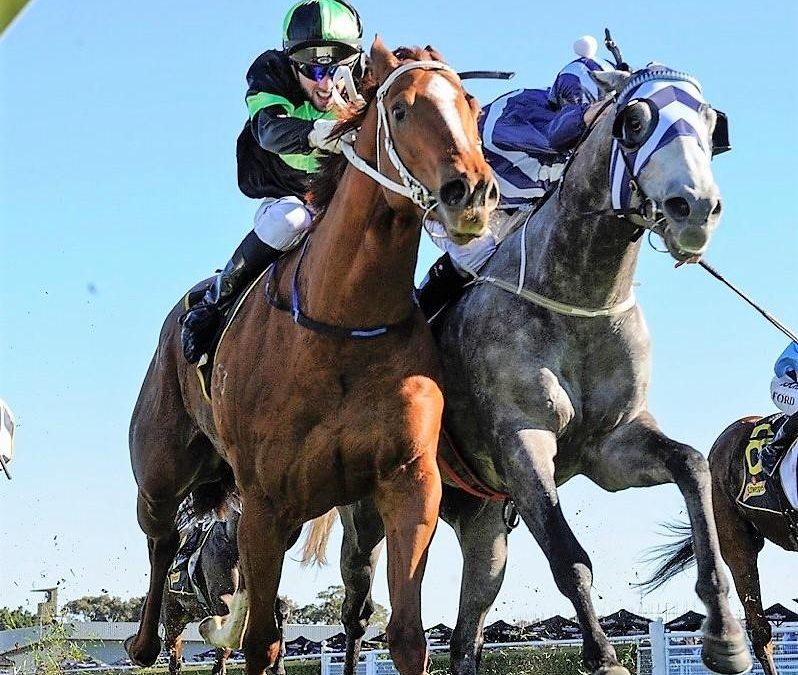 A busy week for Proven Thoroughbreds will be highlighted by the annual ASX Thomson Reuters Charity Foundation lunch on Saturday at Rosehill where a 10 percent share in one of our horses will be auctioned off for a good cause.

As many as 93 auction items will be sold to the highest bidder including a 10 percent share in a Proven Thoroughbreds two-year-old colt by EL ROCA (closely related to REDZEL) out of FLOWER BOMB.

CLICK HERE to view/bid on any of the auction items online.

The Rosehill meeting will also see Proven Thoroughbreds represented on the racetrack by the ever-consistent gelding ARGENT D’OR (pictured) in the 1100m BM78 Handicap. If the predicted rainfall arrives, the son of SEBRING will be hugely advantaged.

Up at the Sunshine Coast on the same day, last start placegetters SCALLOPINI and TOO HOT TO HOLD contest the 1400m BM75 Handicap and 1200m QTIS 3YO Handicap respectively. Trainer Steve O’Dea has fired out of the blocks this season, currently leading the Brisbane metropolitan premiership with six wins and nine placings.

Then on Wednesday the O’Dea stable will roll out a trio of horses in the black and lime green colours at Ipswich. The talented FRANCISCA will be aiming for consecutive city wins when she lines up in the 1350m C2 Handicap while three-year-old filly INVIGORATING makes her debut in the 1100m 3YO Maiden Plate following a pair of encouraging trials.

Our other Ipswich runner will be WAS IT WORTH IT in the 1680m BM70 Handicap third-up from a spell.

On the same day at Canterbury, trainer Joe Pride is set to run GAMBLESTOWN in the 1550m BM74 Handicap and TAMARACK in the 1900m BM70 Handicap.

The John Bateman-trained READABEEL is our final runner in the week ahead, stepping out in a 1600m C1 & Maiden Plate at Wagga.

Proven Thoroughbreds’ upcoming trialists include TAHSIN, BRING ME SHOWERS and THE GOLDEN HIND for John Thompson at Randwick on Tuesday, and the O’Dea-trained BLONDE BY CHOICE at Deagon on Thursday.